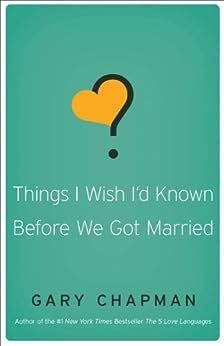 Title: Things I Wish I’d Known Before We Got Married
Written By: Gary Chapman
Genre: Relationships/Non-fiction
Recommended Ages: 16 & up

I have read two if Gary Chapman’s books before (The Five Love Languages and Five Love Languages for Singles) and enjoyed them. When my friend gave my fiance and I this book, I knew I wanted to read it before our wedding. I’m glad I did. We had already talked about many of the things Gary mentions in his book, but there were a few that I think will be very helpful for us as we get married and move past the “tingles.”

Most of what Mr. Chapman said was very clear and easy to understand. There were a few things that I was a little curious why he had to mention. Not because they were bad, but because I thought they were more obvious to talk about with a potential spouse than they apparently are.
Another thing that bugged me a little is that from what I understand, this book–and the author–is supposed to be geared toward Christians. But when he mentioned the Bible (fairly rare), he called it the Hebrew and Christian Scriptures. I’m probably being a little picky here, but I would have appreciated it if he would have called the Bible what it is and put in a few more Biblical reasons behind each of his tips.

The majority of the book will definitely be usable. I know my fiance will not be able to read the whole book before the wedding, so I took quite a few notes while reading and after I finished it. And now I have a good conversation to have with him in the next week or so.

The way the book was written and formatted made it easy to read.

I can’t remember finding any typos. The only problem I had was the personality test in the back that must have a link that is expired. I found another version of the test and emailed the people at his website to let them know it doesn’t work anymore.

This isn’t one of those books that you simply can’t put down. But it isn’t so dry you don’t ever want to pick it up again, either. It’s a little more neutral with a fairly good tip on the former description’s side.

I would recommend this book to anyone who are going into a serious relationship, engaged, or even newly married. There are at least 3 chapters that could be helpful to newlyweds and might just save their marriage.