Today, I have author Annie Douglass Lima on my blog talking about her new book, The Gladiator and the Guard. Make sure you read through for an exciting excerpt and interview as well as the link to the giveaway.

I’m excited to announce that Annie’s young adult action and adventure novel, The Gladiator and the Guard, is now available for purchase! This is the second book in the Krillonian Chronicles, sequel to The Collar and the Cavvarach.

Bensin, a teenage slave and martial artist, is desperate to see his little sister freed. But only victory in the Krillonian Empire’s most prestigious tournament will allow him to secretly arrange for Ellie’s escape. Dangerous people are closing in on her, however, and Bensin is running out of time.  With his one hope fading quickly away, how can Bensin save Ellie from a life of slavery and abuse?

What is the Collar for, and What is a Cavvarach?

The story is set in a world very much like our own, with just a few major differences.  One is that slavery is legal there.  Slaves must wear metal collars that lock around their neck, making their enslaved status obvious to everyone.  Any slave attempting to escape faces the dilemma of how and where to illegally get their collar removed (a crime punishable by enslavement for the remover).

Another difference is the popularity of a martial art called cavvara shil.  It is fought with a cavvarach (rhymes with “have a rack”), a weapon similar to a sword but with a steel hook protruding from partway down its top edge.  Competitors can strike at each other with their feet as well as with the blades.  You win in one of two ways: disarming your opponent (hooking or knocking their cavvarach out of their hands) or pinning their shoulders to the mat for five seconds.

Click here to order The Collar and the Cavvarach from Amazon

And now, The Gladiator and the Guard, with another awesome cover by the talented Jack Lin!

Bensin, a teenage slave and martial artist, is just one victory away from freedom. But after he is accused
of a crime he didn’t commit, he is condemned to the violent life and early
death of a gladiator. While his loved ones seek desperately for a way to rescue
him, Bensin struggles to stay alive and forge an identity in an environment
designed to strip it from him. When he infuriates the authorities with his
choices, he knows he is running out of time. Can he stand against the cruelty
of the arena system and
seize his freedom before that system crushes him?

Click here to order The Gladiator and the Guard in Kindle format from Amazon for $2.99 a discounted price of just 99 cents through May 30th!

Click here to order The Gladiator and the Guard from Smashwords (for Nook or in other digital formats) for $2.99 a discounted price of just 99 cents through May 30th!

It was fun revisiting the characters I had created for The Collar and the Cavvarach, and figuring out what they’re like four years down the road. I had to get to know Bensin and his sister Ellie all over again, as an eighteen-year-old and a nine-year-old now. I enjoyed the challenge of figuring out how having a safe and stable life for the last four years would have shaped their personalities as they grew.

I think it would be interesting to spend a day with Skipper, from right here in The Gladiator and the Guard. Skipper isn’t his real name, but he keeps his real identity a secret, and with good reason: if the authorities found out that he uses his sailboat to smuggle slaves away to freedom, his boat would be impounded and he would be sold into slavery himself. But I would love to hear about the different people this brave young college student has helped, and the stories behind how they managed to escape. Of course, convincing Skipper that it would be safe to talk to me about them might be tricky.

There will be at least three altogether. I may eventually write a few more books, or perhaps short stories, set in the same world, but they would probably have a different cast of characters.

I hope readers will realize, as Bensin eventually does, that we can all choose the type of person we want to be, no matter what our circumstances are. We might not have a say in what happens to us, but we can decide how we will respond and who we will be.

Hmm, that’s a tough question. Maybe Eanren, the faerie cat/man in the Tales of Goldstone Wood series, by Anne Elisabeth Stengl. He’s got a fun personality, especially as he interacts with the character of Imraldera. I definitely recommend those books for anyone who likes fantasy!

“Excuse me,” put in the man who had followed Bensin over. He shouldered his way forward and stuck out a hand. “Steene Mayvins? I’m Gile Murton, the manager here at Red Arena.”

“Congratulations on your slave’s performance today. His skills are impressive, and it’s obvious he’s had the benefit of some excellent training.”

You could almost see Coach swelling with pride. “Thanks! Yeah, Bensin’s sure been doing great. I couldn’t be more proud. We’ve been working really hard for this, and I fully expect him to take first place next weekend.”

“Me too,” whispered Ellie.

“It will be his second time.” Coach grinned down at Bensin. “He won back when he was fourteen, as well.”

“Yes, I know. The Grand Imperial was held in Red Arena that year, too. But due to an injury sustained in the final match, he was unable to compete in cavvara shil for much of the next year. Though he did qualify for the next Grand Imperial in Blue Arena, he lost in the second rung. The year after that, fighting in the under-eighteen age group in Green Arena, he made it all the way to the seventh rung. Last year in Yellow Arena he came in third.”

They were all staring at the man now. “I make it my business to follow the careers of promising slave fighters,” Mr. Murton explained to Coach. “As you may know, Red Arena’s gladiators have a reputation for being the finest warriors in the business. Occasionally, when we see someone who we believe would be a good fit for our arena, we make his owner an offer.” He pulled a business card out of his pocket and handed it to Coach. “Regardless of how much further your slave advances in this year’s tournament, we’ve seen all we need to. If you’re interested in selling, we’ll make it more than worth your while.”

But Coach was already shaking his head. “No. Thank you, but Bensin’s not for sale.”

“Think it over,” the man urged. “You don’t have to decide right now. Red Arena has a large budget, and we’ll make you an offer you can’t refuse. Or name your price.”

“I’m already refusing.” Coach handed the card back. “Bensin’s practically my son; I mean, I adopted his sister and everything. I’m not selling him. Besides, after next weekend, I’m setting him free. He just has to win enough prize money first for me to buy a new truck. My current one isn’t going to last much longer.”

“Red Arena would pay you enough to buy several brand new vehicles. At least keep us in mind if he doesn’t win.”

The man tried to hand the card to him again, but Coach shook his head and wouldn’t take it. “No. I’m sorry; I’m not even going to consider it.”

“All right, then.” Mr. Murton turned to Bensin, who was icing his injuries on the floor. Smiling, he crouched down and held the card out to him instead. “Bensin. Congratulations on your upcoming change in status. Considering the talent you’ve shown so far, I have no doubt that you’re going to win next weekend and earn your freedom. Once you’re at liberty to make your own choices, keep Red Arena in mind. We mostly buy slaves, but we do occasionally sign contracts with free athletes. It would be a lifetime commitment, but we pay in advance, and I think you’ll find you’d be getting quite a deal. Why, you could put your sister through college with what we’re prepared to offer.”

From the corner of his eye, Bensin could see Coach frowning, but he took the card. “Okay. I’ll think about it.”

“Please do,” Mr. Murton urged, still smiling. “It’s obvious how much you love cavvara shil. Can you imagine being able to spend all day at it? No more hiring out, no more chores around the house. Nothing but training and competing in the sport you love, all day, every day, for the rest of your life, surrounded by people who feel the same way.”

“Sounds great.” Bensin slipped the card into his pocket. “Thank you, sir.”

“Call me Gile.” The man stuck out his hand, and Bensin shook it. It was always a little weird shaking hands with free people, but it felt good. “I’m so glad to have finally met you in person, Bensin. I can’t wait to watch you win next weekend, but remember, we’ll be glad to take you no matter how you do.” With a last warm smile, the man stood up and walked away, not sparing another glance for Coach Steene.

Coach was still frowning. “You should throw that card away. You don’t want to be a gladiator.” 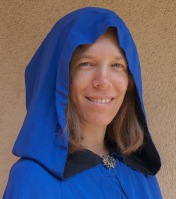 Annie Douglass Lima spent most of her childhood in Kenya and

later graduated from Biola University in Southern California. She and her
husband Floyd currently live in Taiwan, where she teaches fifth grade at
Morrison Academy. She has been writing poetry, short stories, and novels since
her childhood, and to date has published twelve books (two YA action and
adventure novels, four fantasies, a puppet script, and five anthologies of her
students’ poetry). Besides writing, her hobbies include reading (especially
fantasy and science fiction), scrapbooking, and international travel.
Connect with the Author Online:

Now, enter to win an Amazon gift card or a free digital copy of The Collar and the Cavvarach!
a Rafflecopter giveaway
Or find the giveaway at this link: http://www.rafflecopter.com/rafl/display/ad2fd99a3/?